Discover The Best Spots for Wildlife Lovers in Sri Lanka

Search for Blue Whales in the South of Sri Lanka

Tailor this holiday to your requirements. Talk to our team about available upgrades and changes.

Our Suggested Day By Day Itinerary

This tour can be fully personalised and upgrades are available.
Sri Lanka tailor-made holidays will be designed to suit your preferences.

Based on 2 people sharing a Twin or Double Room

Today you will start your Sri Lankan adventure by flying to Colombo International Airport.

“Ayubowan” & ‘’Vanakkam’’. Welcome to tropical paradise.
You will be welcomed and greeted by your guide or The Earth Trip representative on arrival at the waiting area at Colombo International Airport. You will be transferred to your hotel in Kalpitiya. 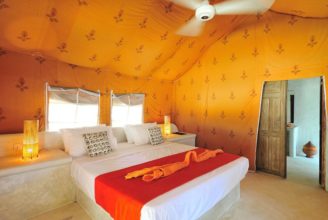 The bluest of skies melts seamlessly into the azure of the Indian Ocean to make a picture-perfect backdrop to a unique, tailor-made tropical holiday experience.

February to March is the best recorded times for sperm whale sightings. November through March is the best time of the year for dolphin watching on the Kalpitiya coast in Sri Lanka. The seas are calmer and the dolphin pods gather to feed in the warm rich waters of Kalpitiya. These friendly mammals will love to amuse you by following the bow of the boat you will be travelling on. Be sure to take your camera. The pods playful high pitched communication can be heard if you listen carefully. The dolphin songs can be quite astonishing. Our local guides who will take you on your dolphin watching trip will surprise you how accurately they read these beautiful intelligent mammals of the deep blue waters of Sri Lanka.

The bluest of skies melts seamlessly into the azure of the Indian Ocean to make a picture-perfect backdrop to a unique, tailor-made tropical holiday experience.

Schools of dolphins, hundreds strong can often be seen playfully spinning and frolicking along the Kalpitiya coastal belt. Among other dolphin groups, Spinner Dolphins are mostly spotted in Kalpitiya waters. These spectacular creatures will leave you wanting to return for another sighting of their magnificent acrobatic displays in the water and air. These aquatic mammals will ensure you get an unforgettable joyful memory.

You will then travel to your accommodation in Wilpattu.

After an early breakfast you will enjoy a full day safari with a picnic lunch.

Wilpattu National Park (‘Land of Lakes’) is situated on the north western coast near the ancient city of Anuradhapura. It is the largest and oldest National Park in Sri Lanka, consisting of 140,000 hectares of mostly dry zone evergreen forest cover and a coastal belt to the West. This is one of best places to see leopards in Sri Lanka alongside Yala National Park. The open grassy plains are set within the thick dense scrub jungle. The wetland includes around 48 shallow natural lakes known as Villus, natural basins that are filled up with rainwater and two salt water lakes. These natural lakes are the most important parts of the complex eco-system in the park.

After an early breakfast you will enjoy a second full day safari with a picnic lunch.

The park is home to elusive leopards, elephants, sloth bears, water buffalos, Mugger Crocodiles, Spotted and Barking deer, wild boar and pythons. You may see the wild animals, particularly elephants, near lakes in the early morning and late afternoons. The park is also home to many endemic birds including the Ceylon Junglefowl, Brown-capped Babbler, Ceylon Woodshrike and Black-capped Bulbul in riverine habitats.

You will travel to Wasgamuwa National Park for a safari.

Wasgamuwa National Park features incredibly diverse wildlife. The name Wasgamuwa derives from an ancient meaning as a gathering place for bears. This park is home to 23 species of mammal and reptiles and is especially known for its high abundance of sloth bears (Melursus Ursinus). It’s home to some of the largest Asian elephants and the “marsh elephant” of Wasgamuwa are reputedly the largest of the Sri Lankan elephants. Some 143 species birds have been recorded of which 5 are endemic to Sri Lanka. Fifteen species of amphibians have been reported including some endemic species. There are also 35 reptile species, 17 fish species plus many butterflies can be seen flitting around the park and 52 different species have been recorded The shy sloth bear is today a highly endangered species and yet has been seen here. Mugger crocodiles have been spotted on the banks of the rivers camouflaged in murky waters as they await their prey. The Toque macaque “rilewa” and the Purple faced langur, both endemic species of monkey to Sri Lanka can be sited too.

Wasgamuwa is distinguished from other parks by having a full complement of predators of which bears are particularly noteworthy. Ecological research undertaken in the park suggests that the density of bears in Wasgamuwa is probably higher than anywhere else in Sri Lanka. Climate conditions are fairly typical of the dry zone and largely influenced by the North East monsoon. 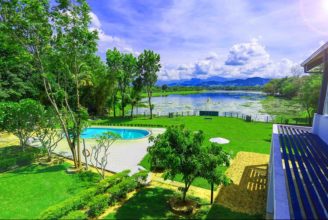 Step into Lavendish Wild and feel the wild atmosphere that you have never felt before! Mysteriously hidden gem in the jungles of Wasgamuwa 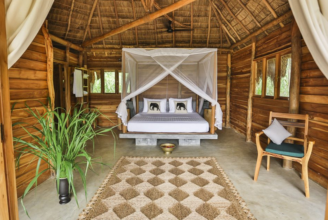 Take your time enjoying this natural paradise with boat safaris, jungle drives, bicycle tours, riverside picnics, naturalist treks and even a walk with the Vedda neighbours, one of the last remaining communities of the forest-dwelling, indigenous people of Sri Lanka.

The park was closed during the war for three decades. This park was established to protect the catchments area of the Senanayake Samudraya (lake). This wildlife richness of this wetland is a natural habitat for a wide range of fauna and flora consisting of dry mixed vegetation including savannah grass and an extensive green cover. About 45% of the vegetation is evergreen forest, 33% savanna, 9% grassland, 2% cheina cultivations and the balance is water bodies dominated by Senanayake Samudraya. The park hosts medicinal shrubs and trees, while a number of locally known trees such as Vevarana, Halmilla, Veera, Palu, Ebony and Mahogany are found in great numbers. The park with its thick green canopy is a haven for birds and nearer to the Samudraya even migratory birds such as Painted Storks, Pelicans, Cormorants and Teals can be seen. A host of local birds such as the Grey Dove, Malabar Horn Bill and Grey Horn Bill, Koel and a number of water birds are found in this jungle habitat. January to May is the green season, with the chance of afternoon and night time showers. The lake is at its fullest and there is amazing birdlife as all the migratory species are in residence. You can also see stunning early morning views of cloud engulfed mountains.

June-December is the dry season, as the year goes on the lake subsides and exposes the lake floor where fresh grass grows and attracts large herds of elephant. During this time the days are hot and the nights are cool.

Take your time enjoying this natural paradise with boat safaris, jungle drives, bicycle tours, riverside picnics, naturalist treks and even a walk with the Vedda neighbours, one of the last remaining communities of the forest-dwelling, indigenous people of Sri Lanka.

In the early morning you will take a boat trip to watch the birds and wildlife of Gal Oya.

This is the only park in Sri Lanka where you can take a boat trip to watch the wildlife. A unique opportunity to observe the local wildlife from the stunning Gal Oya Lake: including crocodiles, deer, elephants and many rare and endemic species of birds. This experience is the only one in Sri Lanka that enables you to spot wildlife from the water and to truly immerse yourself in the animals’ habitats. You may be lucky enough to see the elephants swimming between islands or bathing at the lake’s edge.

You will travel to your accommodation in Udawalawe. 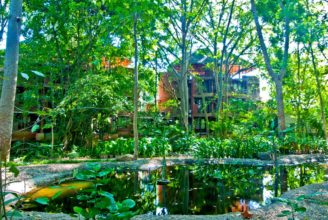 The Grand Udawalawe Safari Resort, offering 4-star facilities, is the only hotel of its’ class in the area. This is an environmental friendly hotel is located next to Udawalawe National Park.

After lunch you will enjoy an afternoon safari at Udawalawe National Park.

An area of 31,800 hectares and surrounded by mountain ranges, the terrain of Udawalawe National Park is a mixture of grassland, shrub jungle, wild tea plantations and two important factors which make this park special – the large Udawalawe Reservoir and the Walewe River, which ensure a supply of water for the fauna within. Internationally renowned for its large herd of elephants, the park is also known for several species of deer, wild boar, wild buffalo, jackal and very rare sightings of leopards.

The Grand Udawalawe Safari Resort, offering 4-star facilities, is the only hotel of its’ class in the area. This is an environmental friendly hotel is located next to Udawalawe National Park.

Early in the morning you will go on a safari of Udawalawe National Park. Afterwards you will travel to Mirissa in the south.

Rest of the day at leisure. 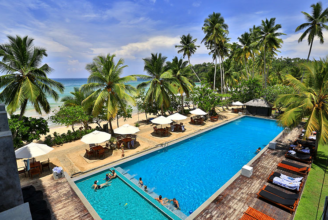 Imagine endless stretches of golden beaches with the rolling surf and stick-fishermen in the sunset. Sit with your favourite cocktail at your side, and a scrumptious Sri Lankan seafood bonanza laid in waiting.

For both days you will have an early morning start in order to watch the Blue Whale; you will leave around 06:00am from your hotel to see the Blue Whales.

Mirissa is the most reliable site in the world for seeing the difficult and desired Blue Whale. It may also be the best place for seeing Sperm Whales too. Blue Whales are the largest animals to have ever lived on earth growing up to some 33 metres long, weighing up to 150-180 metric tons. They live individually or in very small pods or groups and frequently swim in pairs. Large Baleen Whales and Toothed Whales also come within sight of the shore. The calm ocean is abundant with krill which Blue Whales feed. From December through to April; there is an outstanding window of opportunity for observing Blue Whales and Sperm Whales close to the shore.

Rest of the day at leisure.

Imagine endless stretches of golden beaches with the rolling surf and stick-fishermen in the sunset. Sit with your favourite cocktail at your side, and a scrumptious Sri Lankan seafood bonanza laid in waiting.

You will be transferred to Colombo Airport to fly home. Travel time to the airport is approximately 2 1/2 hours. 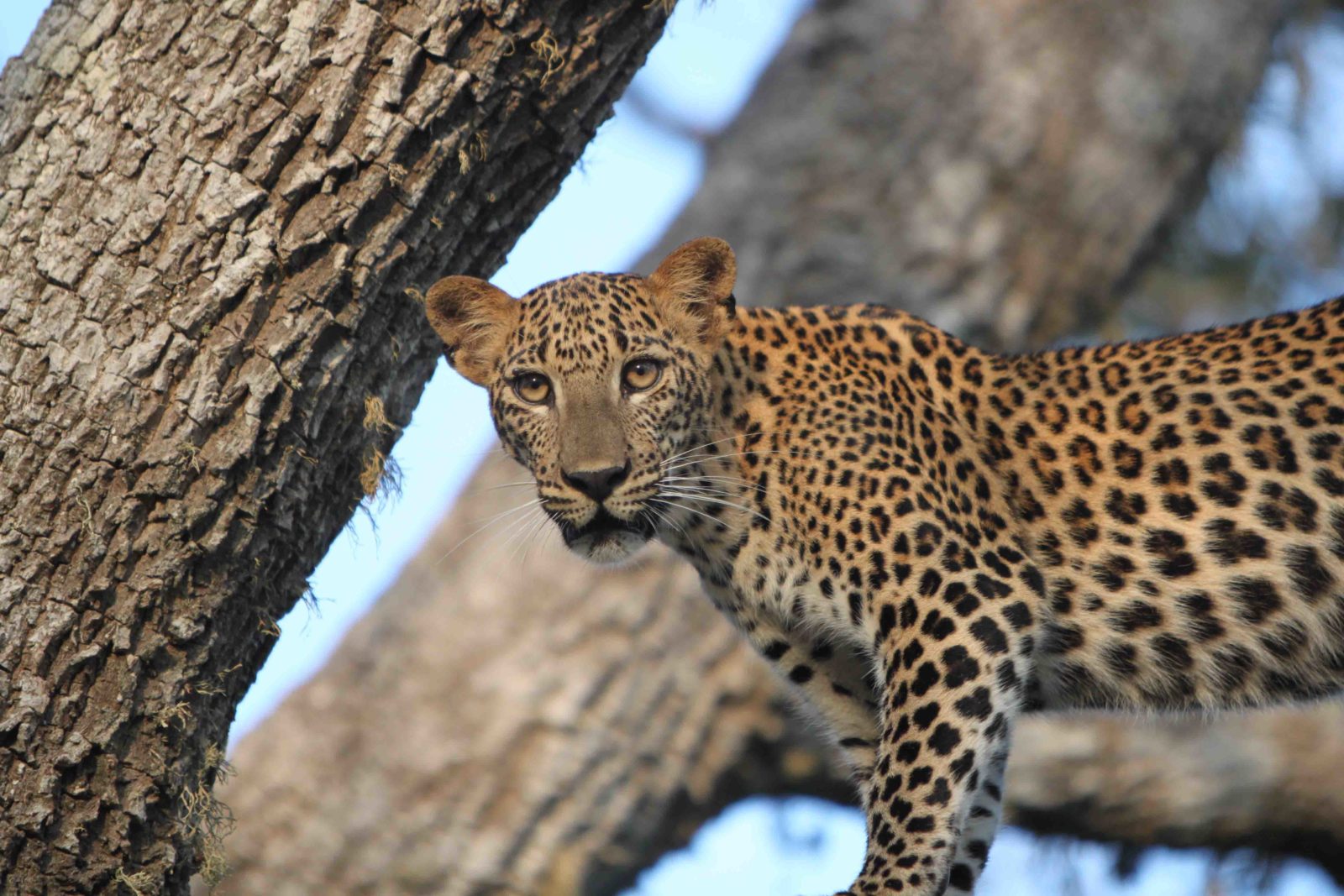 If you love this tour but want to spend more time on the beach we can arrange this for you! Our team will tailor this tour to match your interests. With our in-depth knowledge you will provide the best advice on every detail of the tour.

If you love this tour but want to spend more time on the beach we can arrange this for you! Our team will tailor this tour to match your interests. With our in-depth knowledge you will provide the best advice on every detail of the tour.

Speak To A Travel Specialist

Our specialists have unrivalled experience in our countries, allowing them to craft you a truly memorable bespoke holiday.