Wasgamuwa National Park features incredibly diverse wildlife. The name Wasgamuwa derives from an ancient meaning as a gathering place for bears. This park is home to 23 species of mammal and reptiles and is especially known for its high abundance of sloth bears (Melursus Ursinus). It’s home to some of the largest Asian elephants and the “marsh elephant” of Wasgamuwa are reputedly the largest of the Sri Lankan elephants. Some 143 species birds have been recorded of which 5 are endemic to Sri Lanka. Fifteen species of amphibians have been reported including some endemic species. There are also 35 reptile species, 17 fish species plus many butterflies can be seen flitting around the park and 52 different species have been recorded The shy sloth bear is today a highly endangered species and yet has been seen here. Mugger crocodiles have been spotted on the banks of the rivers camouflaged in murky waters as they await their prey. The Torque macaque “rilewa” and the Purple faced langur, both endemic species of monkey to Sri Lanka can be sited too.

Wasgamuwa is distinguished from other parks by having a full complement of predators of which bears are particularly noteworthy. Ecological research undertaken in the park suggests that the density of bears in Wasgamuwa is probably higher than anywhere else in Sri Lanka. Climate conditions are fairly typical of the dry zone and largely influenced by the North East monsoon. 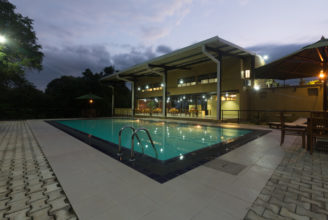 It is in this sanctuary, set amidst the lush expanses of Wasgamuwa, between the majestic Knuckles mountain range and the great Mahaweli River that Far Cry offers a serene haven for the discerning nature enthusiast.

It is in this sanctuary, set amidst the lush expanses of Wasgamuwa, between the majestic Knuckles mountain range and the great Mahaweli River that Far Cry offers a serene haven for the discerning nature enthusiast. 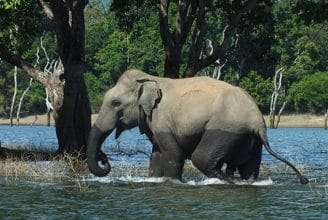 This is the only park in Sri Lanka where you can take a boat trip to watch the wildlife. A unique opportunity to observe the local wildlife from the stunning Gal Oya Lake: including crocodiles, deer, elephants and many rare and endemic species of birds.